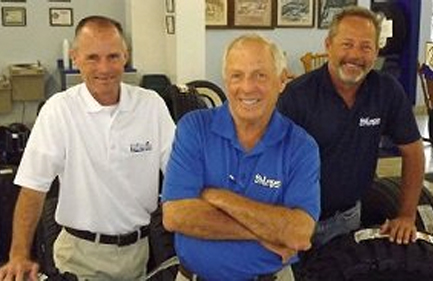 Back in the early 1970's Fort Pierce residents could stop out on western Orange Avenue to pick up fresh eggs at the Miller family stand. An ambitious young man named Joey Miller was building the business, supplementing sales of chickens and eggs with a convenience store. Eventually Joey focused on selling rebuilt batteries and Farm Bureau tires. Starting what locals know today as St. Lucie Battery & Tire. Hard work and customer service have made them the second largest Cooper Tire dealer in the southeastern United states, a twelve-store battery and tire wholesaler/retailer with 100+ employees in four countries. Joey's employees are as loyal as his customers. Many have been with the company for over twenty years.

His sons Mickey and Doug are preparing to carry on the company motto "Home Of Honest,Reliable Service" when Joey retires. Behind that motto is a genuine commitment to both customers and community. Among his many contributions, Joey sponsors the local 4-H and the St. Lucie County Fair. He is also a major force behind the revitalization of downtown Fort Pierce, personally making significant contributions to the Sunrise Theater restoration project.

In 1998, when St. Lucie Battery & Tire needed to renovate its store on U.S. 1 and Orange Avenue, Joey made a major investment in the building and the neighborhood by giving the property a total facelift. The plain concrete block building was embellished with a new roof and Spanish-style architectural details to match neighboring historic buildings. The resulting building is an attractive "gateway" to the downtown shopping district and an example for the many restorations undertaken downtown since then St. Lucie Battery & Tire is proud to have 15 locations in the following cities: